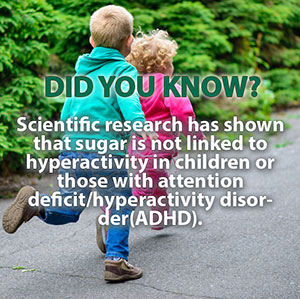 *This content has been reviewed by Dr. Nick Bellissimo (School of Nutrition, Ryerson University)

Satiety and satiation are two important principles in the study of food intake regulation.

Satiety and satiation are two important principles in the study of food intake regulation (1). 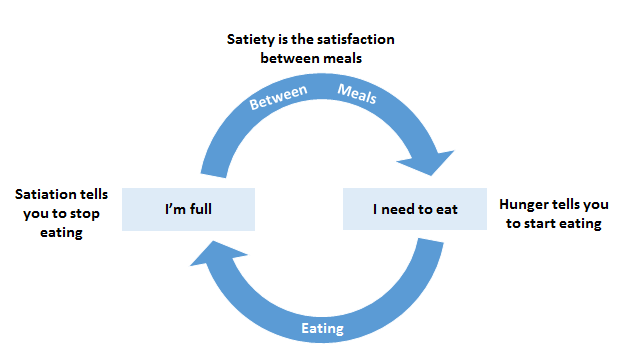 Food consumption triggers a series of neural and hormonal signals that regulate food intake according to energy requirements. In response to the macronutrient composition in one’s diet (i.e. carbohydrates, fats, proteins), the body releases hormones that ultimately signal the cessation of eating (i.e. satiation). This powerful feedback system is sensitive to the overall macronutrient composition of the diet and not specific to any one nutrient (1).

After ingestion, carbohydrates (including sugars) are digested into monosaccharides such as glucose, and are absorbed, resulting an increase in blood glucose levels (i.e. glycemic response). Generally speaking, there is a positive association between glycemic response and satiety. In the short term, carbohydrates that tend to elicit a higher glycemic response are associated with lower food intake at the next meal. The rise in blood glucose levels and the release of insulin immediately signal appetite regulation centres in the central nervous system to suppress appetite and food intake.

The magnitude of effect of sugars on glycemic response may vary by the type of sugars, the food matrix in which sugars are ingested, the dose, the inter-meal interval, and the time-point of measure (2, 3). Sugars suppress food intake and, like other macronutrient sources, activate the normal hormonal cascade of signals that contribute to the suppression of food intake. Sugars, similar to other carbohydrates, do not bypass regulatory mechanisms of food intake. Specifically, fructose, glucose, and sucrose all suppress ghrelin (a "hunger hormone" produced by ghrelin cells in the gastrointestinal tract) to a similar extent.

There is a popular belief that sugar consumption can lead to addiction similar to that of drug or alcohol dependency. This notion was based on the dopamine reward pathway related to pleasurable sensations, which is activated not only by sugar, but also by other pleasurable foods, physical activities, or social events.

A scientific review by Benton et al., examines the plausibility of sugar addiction in humans and its potential role in the development of obesity and binge eating disorders (4).

The findings revealed that human studies do not support the widespread belief that sugar is addictive. It looked for the symptoms of addiction such as withdrawal, craving, and tolerance, and could find no evidence of an association with sugar consumption in humans.

Key findings from the review include:

The article concludes that it is important to examine the underlying mechanisms of eating behaviour so that this knowledge can lead to appropriate interventions. If it is falsely believed that sucrose is addictive and leads to obesity, treatment may inappropriately concentrate on this ingredient while ignoring more beneficial responses.

There are different taste buds, each designed to taste different sensations, including sweet, salty, bitter, sour, and umami (savoury or meaty). Sweet and salty taste buds are the least sensitive, while bitter ones are most sensitive. There are specific taste receptors present on the tongue that are responsible for sensing different tastes. For example, sweet taste receptors are activated by glucose in the mouth.

Taste can help to detect if a food is fresh and good to eat or spoiled and dangerous to our health. A natural liking for foods rich in carbohydrates (starches and sugars) was inherited from our ancestors as sweetness indicated a food was safe to consume.

The sweetness of different types of sugars varies. Common sugars are listed below in order of sweetness. Perceived sweetness can also be impacted by the form of the sugar (solid or in solution), concentration, temperature, presence of other ingredients, and taste differences between individuals.

Emerging research has discovered that sweet taste receptors not only reside on the tongue, but also exist in the gut (5). While inconclusive, researchers are investigating the association between sweet taste receptors on key appetite-regulating hormones such as GLP-1, Peptide YY and CCK and related impacts on perceptions of appetite (6).

For more information, additional resources include: